Book Review #204 – They Go To Sleep by Saugata Chakraborty 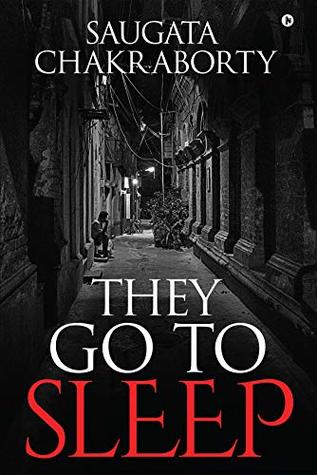 Add on Goodreads | Buy on Amazon

A young widow of a drug overdose victim disappears from Goa. Three years later, a British National claims to know her whereabouts minutes before departing for London Heathrow. The Police of two states is pressed into a joint manhunt. ‘They Go to Sleep’ is a racy thriller on police procedure and criminal psychology.

In the year 2043, when nobody sends a letter anymore, an unlikely candidate decides to write about his springtime memories that are soon going to be erased. When his identity gets revealed, the impact on several individuals and the society at large assumes epic proportions. ‘A Man of Letters’ is a science fiction with humane emotions at its core.

A promising poet meets his muse on board a train. They share a captivating conversation but forget to ask each other’s name. Will they be able to meet again in an Indian metro? ‘What’s In a Name?’ is a humorous look at everything Bengali: gossip, fish, cutlets and the Kolkata Book Fair.

These three stories are joined by nine equally exhilarating tales of ordinary people and the choices that they make under extraordinary circumstances. The compilation will surely compel the readers to keep their midnight lamps burning.

I received a copy of this book in exchange for an honest review.

Before anything else, let’s talk about what made me pick this book up in the first place. It was the title. For a short story collection (which I initially assumed it to be), it was a fairly unusual title and I was intrigued. However, when I began reading it, I realized that the book is so much more than a  simple short story collection. The book is a story of short stories. Makes sense? Believe me, once you read the book, it will!

Anyway, the book consists of 12 short stories, each of them unique in their own way. And each of them is a nice read. By a “nice” read I mean that neither of these stories is uninteresting in any sense. Once you are done with a story, you realize why it really is written and what the significance behind it is, and what Chakraborty intends to say, and that she didn’t write it just for the heck of it.

Despite being just over a 100 pages in length, the book holds much promise and leaves an impact on its reader (did on me, at least). And it keeps one hooked, despite it being a combination of short stories.

Lastly, I’d like to say that the cover of this book is really beautiful and having it on my shelf feels pleasing! ❤

Ritika's ReaderRank
Ritika has reviewed 499 books with an average rating of 3.948 out of 5.
457 people have found Ritika's written reviews to be helpful on Goodreads.
See more...

Top 5% based on reading volume

Top 10% in books from large presses